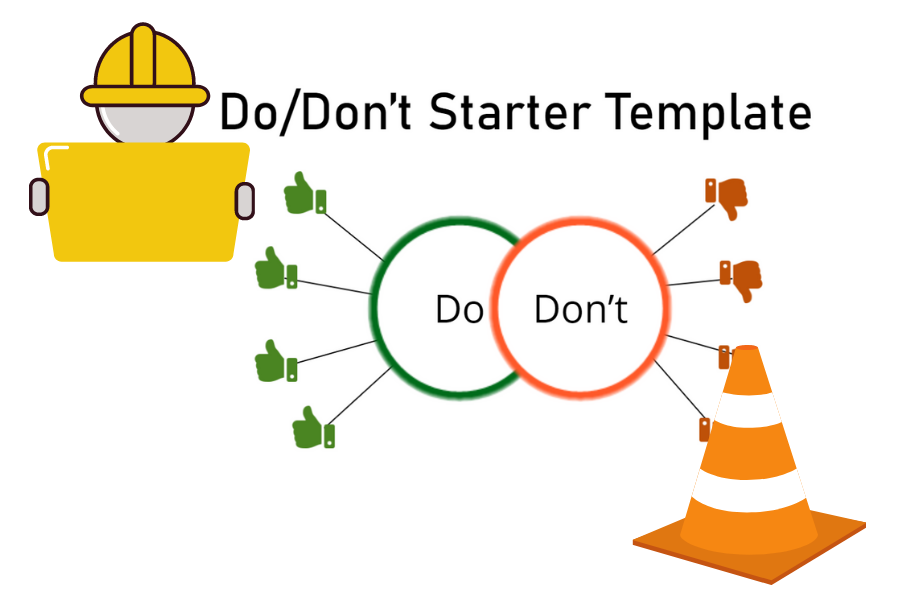 For day 3 of my personal Articulate 360 Storyline challenge, I wandered into Presenting Opposing Lists in E-Learning #303. You can see my final project and watch the timelapse.

The challenge is for designers “to find creative ways to present opposing lists”, like Dos & Don’ts. These should look good, be clear, and be easy for the learner to process. That’s a bit of a tall order for a newbie like me, but I pressed on.

I browsed through the completed submissions in the comments for inspiration and clarity, as I did before. I have to tell you, I was feeling pretty inadequate to the task.

Then I came across a build by Jodi Sansone that looked great and hard, and she provided her Storyline file as a template. For this challenge, then, I decided to try to recreate her build using her file as a reference.

I was learning the technical bits. I’ll focus on style a little later, ‘kay?

Diving into the project

The first thing I did was try to make the graphics look the same. I figured I’d get those down and then worry about making them all interactive later.

If I had looked at all the pieces in the timeline one by one on Jodi’s build, I would have noticed that not all the elements on the screen were on the timeline. That was a scavenger hunt, let me tell you. It took some comment reading and poking around Jodi’s build for me to realize that the slide had layers. (I mentioned that I didn’t know much about Storyline, right? I’m sure I mentioned that somewhere).

I would also have noticed that her thumbs up and down had a hover state. Here I was thinking I was almost done and comparing mine to hers when I saw the little green ring light up around her green thumbs up. What?! I checked another one, and then a red one. Sure enough. Hover state.

I was so close! I finally solved my hover state dilemma by adding a hover trigger to change the state on mouseover. I didn’t see one on Jodi’s build, so I know there’s some other way to do it. I will learn it.

I learned SO many new technical things. I also learned a few things about myself.

One of the technical pieces I learned from this piece was how to use layers. That was really useful for object triggers. The hover state was a neat trick. But I also learned that there are lots of built-in tools in Storyline I have yet to explore. I didn’t want to go down a rabbit hole exploring graphics, so I literally had to cut myself off from browsing. I just went into PowerPoint and crafted what I needed so I wouldn’t get distracted any further.

Reflecting on my own learning process, I realized that I jumped in too quickly. I should have taken time to study the original build, to understand it better, before trying to tackle it. If I had looked at it closer and perhaps taken some notes or written some questions, I think I wouldn’t have wasted so much time trying to add in something after the fact. That’s a valuable lesson all around.

I’m Laura. I’m an instructional designer working on improving my e-Learning development skills. Check out my main website page to see my portfolio of things.